How to Change SSH Port in Linux SSH or Secure Shell daemon is a network protocol that is used to perform remotely secured log-ins to Linux systems via a secured channel through unsecured networks using strong cryptography.

One of the most basic utilities of SSH protocol is the ability to access Unix shells on remote Linux machines and execute commands. However, SSH protocol can offer other implementations, such as the ability to create secured TCP tunnels over the protocol, to remotely and securely transfer files between machines or to act as an FTP-like service.

The standard port used by SSH service is 22/TCP. However, you might want to change the SSH default port in your Linux server, in order to achieve some kind of security through obscurity because the standard 22/TCP port is continuously targeted for vulnerabilities by hackers and bots on the internet.

To change the SSH service default port in Linux, first, you need to open the main SSH daemon configuration file for editing with your favorite text editor by issuing the below command and making the following changes.

In sshd_config file, search and comment on the line that begins with Port 22, by adding a hashtag (#) in front of the line. Below this line, add a new port line and specify your desired port to bind SSH.

In this example, we’ll configure SSH service to bind and listen on port 34627/TCP. Make sure you choose a random port, preferably higher than 1024 (the superior limit of standard well-known ports). The maximum port that can be set up for SSH is 65535/TCP. 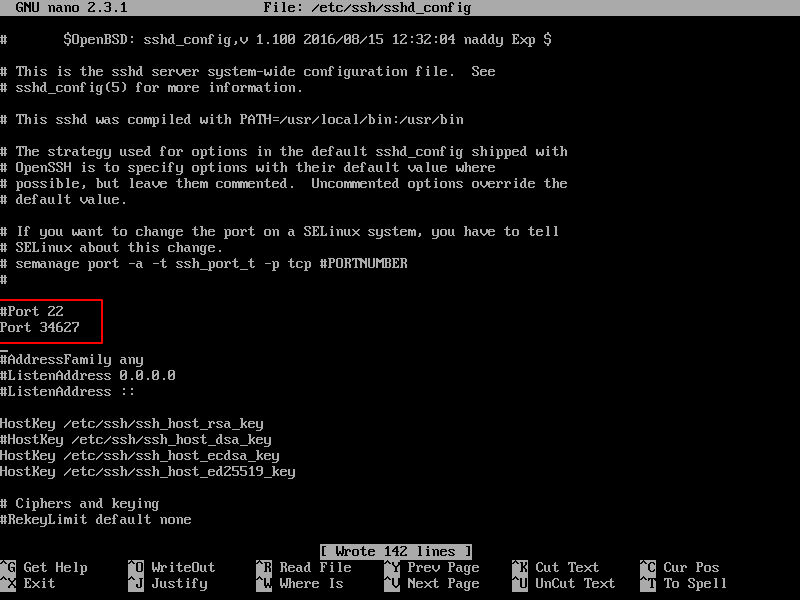 After you’ve made the above changes, restart the SSH daemon to reflect changes and issue netstat or ss command to confirm that the SSH service listens on the new TCP port.

In CentOS or RHEL Linux-based distributions, install policycoreutils package and add the below rules to relax the SELinux policy in order for the SSH daemon to bind on the new port.

Also, don’t forget to update the firewall rules specific for your own installed Linux distribution in order to allow incoming connections to be established on the new added SSH port.